We believe that it is our duty as people of faith to bring healing and wholeness into the world. We do this by partnering with strong leaders in our community, advocating for justice, and realizing our faith through actions of peace, inclusion and activism. Temple Sholom is on the forefront of social activism, believing that we are our most spiritual selves when marching for the rights of others, speaking out against injustice, and working with other communities to bring more justice to our city, county, and state. Below are a few media clips of our work in the greater Cincinnati community. We want to know your passion areas too – please write or call us and let us know about your good work.  office@templesholom.net

Temple Sholom is actively involved with The Amos Project.  The Amos Project is a multi-congregation, social justice community organization. They organize congregations around community issues that impact the poor and working families.  They develop the leadership skills of people to be active in public life.  They are motivated by faith traditions and inspired by American Democracy.   Here is a wonderful video about The Amos Project:

And here is news coverage of Rabbi Miriam Terlinchamp’s speaking about making Cincinnati a Sanctuary City:

Concerned about threats of mass deportations and formation of a Muslim registry under the Trump administration, leaders of several faith communities Wednesday announced formation of the Cincinnati Sanctuary Network.
Cincinnati CityBeat: Faith Communities Join Sanctuary Movement in Cincinnati
The Amos Project announced today that a half-dozen congregations representing Islam, Judaism and Christianity have become sanctuary sites willing to host vulnerable people in their buildings or solidarity congregations providing other support.

WVXU: Sanctuary Network Ready To Shelter Immigrants, Others Under Threat
The Cincinnati Sanctuary Network notes the sanctuary movement has been around for a long time, but gained renewed momentum following talk of mass deportations and a Muslim registry during the 2016 presidential election.

And here is an article from the New York Times in which the work that Rabbi Miriam Terlinchamp and Temple Sholom are doing with The Amos Project is featured on the FRONT PAGE!
https://www.nytimes.com/2017/06/10/us/politics/politics-religion-liberal-william-barber.html

Temple Sholom is part of PreSchool Promise, an important initiative in which many faith organizations have joined forces to provide every child with a good preschool experience and education, regardless of their economic background.  Our Rabbi, Miriam Terlinchamp, recently was the emcee of an event that brought many different religious organizations together for this noble cause.  Here is a brief video from the event:

The service at Temple Sholom was also featured on the front page of THE ISRAELITE. 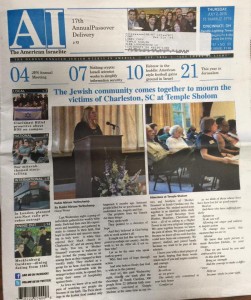 The Cincinnati Enquirer featured Rabbi Miriam Terlinchamp’s important piece on the tragedy in Orlando about how prayers are the first steps to action.  You can read the article below:

“Shimon [the son of Rabban Gamliel] says:
It is not what one says, but rather what one does, that makes all the difference in the world. “ Midrash Psalms 116:8

Making a difference with direct acts of loving kindness

SOUP KITCHEN
Our team meets every other month to cook (Fridays) and serve (Sundays) meals for the Over-the-Rhine Kitchen serving more than 5,734 poor and homeless individuals in the greater Cincinnati area. To learn more, contact: Michaele Jordan at Temple Sholom or see: www.Overtherhinekitchen.org

VALLEY INTERFAITH
We collect personal needs items, food, clothing and school supplies for the Valley Interfaith Food and Clothing center. This is our neighborhood resource for the nearly 20,000 individuals in need in our area. For more information see: www.vifcc.org

JEWISH COMMUNITY IN ODESSA, UKRAINE
We collect un-used children’s clothing for the Jewish community in Odessa. In the winter we engage in a congregation-wide crotchet/knitting project to create blankets and hats to send to their community as well.

JEWISH COMMUNITY PARTNERS IN NETANYA, ISRAEL
Netanya is our sister city in Israel. Through the guidance of The Jewish Federation of Cincinnati we are able to send needed financial contributions in order to support our sister city.

Making a difference through changing the narratives that we tell and helping change the broken systems in our world.

PRESCHOOL PROMISE:
Cincinnati has the second highest rate for child poverty in the United States. We are greatly pained by this information and seek to make a difference in the amount of children living below the poverty line in our community. Right now, we are active partners in The Amos Project efforts to bring “Preschool Promise” to the ballots in November 2016. We are working to ensure that all 3 and 4 year-old-children in Hamilton County have the ability to attend preschool regardless of finances. Research shows that children who receive 3 meals a day and intellectual stimulation from ages 3-5 are more likely to succeed than those who do not. We cannot afford to keep children from having a fair start in this world. For more information see: www.cincy-promise.org

ECONOMICS OF COMPASSION INITIATIVE
By engaging in dialogue about our collective and personal relationship with debt we believe that we can elevate the conversation about releasing ourselves from indebtedness and supporting those who strive for economic independence. Temple Sholom is the Jewish representative in the 4 part Jubilee Dialogue series with esteemed speakers such as: Dr. Walter Brueggemann, Rev. Damon Lynch III, Dr. Adam Clark, Father Rob Rhodes and or own Rabbi Miriam Terlinchamp. To learn more see: www.econofcompassion.org

ELEMENTZ
Elementz is an urban engagement center for youth centered on hip-hop, respect and community building. Students are encouraged to bring their gifts of art, music, and dance to Elementz so that they can hone their craft, learn how to bring their gifts to the public, and share in a positive environment for youth in the Over-the-Rhine community. Temple Sholom partners with Elementz to bring in artists, collaborate on performances, and learn from their teachers and students. To learn more see: www.elementz.org

INCLUSION
In our community we value inclusion as one of our most central tenets. We strive to be sensitive to different expressions of faith, race, economics, sexual and gender identity. We understand that people come to us from all different parts of the world and stages of life, some are changing names, pronouns, relationship status, and grappling with major life events. To all of you, we say we see you; you are welcome, safe, and included in our space.

BE A PART OF OUR COMMUNITY